Trump wants US troops out of Syria. Putin might use that to his advantage. Political and military events 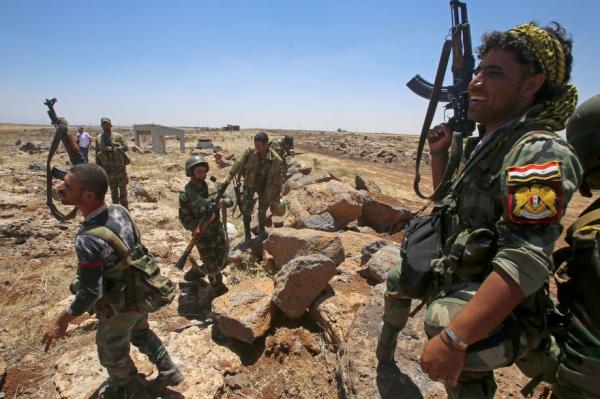 President Trump may be on the verge of a huge Syria mistake after he speaks with Russian leader Vladimir Putin in July.

President Donald Trump is desperate to remove thousands of US troops from Syria — and may be willing to make a big concession to Russia in order to do so.

During a Monday meeting with Jordan’s King Abdullah II, Trump reiterated his long-held desire to bring home roughly 2,000 US troops in Syria, according to CNN.

But what’s alarming is that Trump’s plan to do so could involve exchanging favors with Russian President Vladimir Putin.

Consider what Trump reportedly plans to ask the Russian leader when they meet for a July 16 summit in Helsinki: He wants Russia to promise to not attack the small contingent of US-backed fighters in southwest Syria near its border with Jordan, even though pro-regime forces have been bombing the area known as Daraa province for the past week, displacing about 45,000 people. If Russia stopped pro-Assad fighters from attacking, though, it would give Trump space to withdraw American troops that ostensibly support anti-government forces.

Trump, in return, wouldn’t impede Russia’s efforts to help Syrian President Bashar al-Assad as he gains further control of southwest Syria. That would permit the Syrian dictator to consolidate even more power, bringing him a step closer to winning his country’s seven-year-long civil war.

But that’s not all: Trump wants Russia to ensure that no more fighting happens in southwest Syria and that Iranian proxies, like Hezbollah, cannot enter the region.

Trump’s reported plan has a few problems, however.

First, Russia has previously backed out of several Syria peace deals with the United States. It’s very hard to trust Moscow’s word that it will help de-escalate violence in Syria, since the Kremlin continues to support Assad — even as he kills his civilians with chemical weapons. Russia also wreaks havoc of its own and has dropped bombs near US troop positions.

“Trump wants to replicate the disastrous deal with Putin from July 2017, when they agreed on a ‘de-escalation agreement,’” Michael Carpenter, the Pentagon’s top Russia official in President Barack Obama’s administration, tweeted on Friday. “The only side that de-escalated was the anti-Assad opposition, while Russian, Iranian, and Syrian government forces annihilated them.”

And second, Russia and Iran are allies in Syria because of their support for Assad. It’s hard to believe that Russia would suddenly work against Iran solely to make a deal with the United States, unless Putin extracts a big concession from Trump.

“Is Trump trying to get Putin to move against the Iranians in Syria?” Martin Indyk, a Middle East expert at the Brookings Institution, told the New York Times on Thursday. “And if so, what price is he prepared to pay for that?”

A spokesperson for the National Security Council wrote me in an email, “The president believes a better relationship with Russia would be good for both America and Russia, and the President will continue to hold Russia accountable for its malign activities.”

But there might be a slight chance that Putin makes an agreement with Trump to halt some of the military activity — as long as the deal favors Russia.
How Putin might get exactly what he wants in Syria from Trump

Fred Hof, Obama’s special adviser for a transition in Syria, explained it to me this way: Most of America’s small troop presence amassed in northeast Syria is there to defeat ISIS. The US-led coalition is now working to return the area to some semblance of normalcy — and  pro-regime forces don’t like that.

“The thing feared most by Assad, Russia, and Iran is the US succeeding in stabilizing northeast Syria following the defeat of ISIS,” Hof told me. “They are terrified it could produce an alternative to Assad. Putin will likely press Trump to abandon northeast Syria, something Trump says he’d like to do anyway.”

Thus, Putin may work to convince other world leaders that Russia will genuinely help out in Syria this time.

“Putin will try to enlist Israel’s [Benjamin] Netanyahu and Jordan’s [King] Abdullah to the cause, promising them and Trump he’ll keep Assad from doing his worst in southwest Syria, where Jordan fears new refugee flows and Israel wants no Iranian-Hezbollah presence,” Hof continued. “Trump may be tempted to leave northeast Syria to the regime and Iran, claiming he worked a marvelous deal to secure Israel and Jordan in the southwest. And, then, Putin will help Assad consolidate [power] in both places, enabling Iran and Hezbollah to emerge as the big winners.”

So the final deal would simply be this: The US removes its troops from northeast Syria as long as Russia promises to quell the Assad-led fighting in Syria’s southeast, hopefully making Israel and Jordan happy.

It’s unclear, of course, if this is what Putin has in mind. And even if he does, Trump could possibly reject Putin’s proposal. But based on Trump’s own inclinations and longstanding desire to work with Russia, Putin could convince Trump of his plan — which would give Moscow and Tehran even more freedom to do what they want in Syria.

“This is a bad idea,” Boris Zilberman, a Russia expert at the conservative Foundation for the Defense of Democracies, tweeted on Friday. “Once [the] US pulls out, Russia and Iran will do as they please, whatever the ‘terms.’”
Trump’s aides want to keep US troops in Syria

If Trump makes a Putin-friendly deal that leads to the withdrawal of US troops from Syria, it could cause an even bigger rift between the president and his national security team.

At an April White House press conference, Trump said he would withdraw US troops from Syria “very soon” because “it is time to come back home.” This is a theme he has repeated multiple times on the campaign trail and as president.

But at almost the same time in April that Trump was delivering his comments at the White House, and just a few miles away, Trump’s top advisers on Syria were offering a different plan.

“We are in Syria to fight ISIS,” Brett McGurk, the State Department’s top official leading the anti-ISIS coalition, told a Washington think tank. “That is our mission. That mission isn’t over. And we’re going to complete that mission.”

Gen. Joseph Votel, the top military commander for the Middle East, added, “The hard part, I think, is in front of us.”

Continued Votel: “That is stabilizing these areas, consolidating our gains, getting people back into their homes and addressing the long-term issues of reconstruction and other things that will have to be done.”

Trump could undo that work if he agrees to remove US troops from northeast Syria in exchange for a peace agreement in the country’s southwest, as Russia may desire.

At that point, not only would the mission against ISIS end prematurely, but the US would also accelerate the return of Syria to Assad and Putin — putting even more thousands of lives at risk.

The issue of holding monitoring at the border between Azerbaijan’s Nakhchivan Autonomous Republic and Armenia hasn’t been discussed at ...