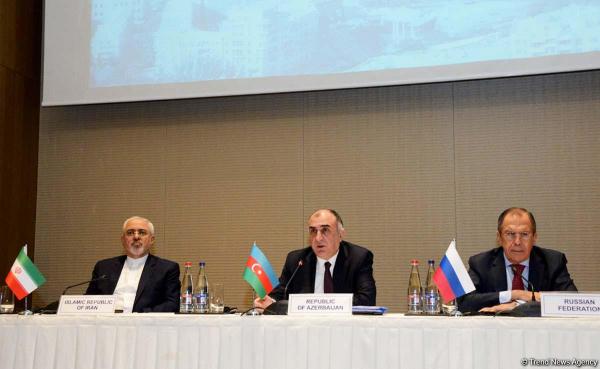 A communiqué has been issued on the results of the trilateral meeting of the Azerbaijani, Russian and Iranian foreign ministers in Baku Apr.7.

The parties agreed to continue the further development of cooperation on the basis of mutual respect, partnership and the principle of noninterference in each other's internal affairs.

The ministers confirmed their commitment to the principles and norms of international law, as reflected in the UN Charter. The commitment to conflict resolution in the region was also confirmed in this regard.

The Azerbaijani, Russian and Iranian foreign ministers also noted the importance of strengthening the fight against new challenges that threaten the regional stability and security and confirmed their readiness for a joint fight against terrorism, extremism, drug trafficking and others. The commitment to the development of cooperation in trilateral format on economic, energy, transport, culture and tourism issues was confirmed.

Azerbaijan, Russia and Iran also confirmed the importance of continuing efforts in determining the status of the Caspian Sea, the signing of a final convention before long, as well as establishment of peace and security in the sea.

By Huseyn Hasanov – Trend: During the meeting with Saudi Arabia’s Minister of Commerce and Industry Tawfiq bin Fawzan ...

Only Russia, Turkey, Iran Can Stop West From Keeping 'Controlled Chaos' in Syria

Only Russia, Turkey, Iran Can Stop West From Keeping 'Controlled Chaos' in Syria   Russia, Turkey and Iran are the only countries ...

IIKSS - Donald Trump suggested a shift away from what he said was the current Obama administration policy ...