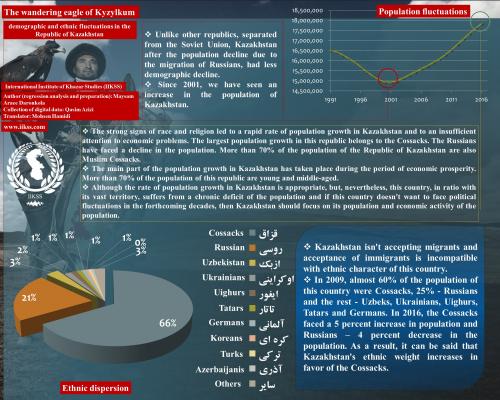 International Institute of Khazar Studies (IIKSS) – Unlike other republics, separated from the Soviet Union, Kazakhstan after the population decline due to the migration of Russians, had less demographic decline. Since the beginning of the economic boom in oil industry in 2001, this country has witnessed population growth.

Of course, the largest population growth in this republic belongs to the Cossacks, who are in close competition with Russians to seize political and economic structures. Meanwhile, after the collapse of the Soviet Union, the Russians have faced a decline in the population. It is necessary to explain that more than 70% of the population of the Republic of Kazakhstan are also Muslim Cossacks, who can be considered the backbone of this republic.

Kazakhstan because of its ethnic nature, isn't accepting migrants and acceptance of immigrants is incompatible with necessary framework for ensuring security and stability in this country. In recent years, this republic has an organic connection with a country like Turkey. From this point of view, it can be said that Cossacks are in search of their Turkish identity.

In 2009, almost 60% of the population of this country were Cossacks, 25% - Russians and the rest - Uzbeks, Ukrainians, Uighurs, Tatars and Germans. In 2016, the Cossacks faced a 5 percent increase in population and Russians – 4 percent decrease in the population. As a result, it can be said that Kazakhstan's ethnic weight increases in favor of the Cossacks.