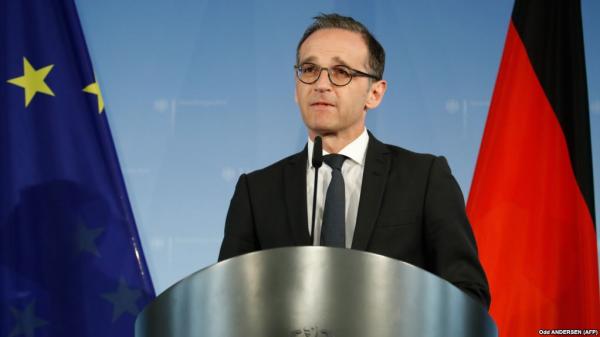 Germany's foreign minister has reiterated Europe's determination to remain a part of the 2015 Iran nuclear deal even in the face of a U.S. withdrawal from the landmark agreement.

Speaking to reporters in Washington, Heiko Maas said he explained the German and European position to U.S. national security adviser John Bolton during talks earlier on May 23.

He said the deal was the best way to block Tehran from resuming its nuclear activities.

"Europe is very, very united in its position on the nuclear accord with Iran, and that will not change," Maas was quoted by Reuters as saying.

There was no immediate comment from the White House on the Bolton meeting or Maas's remarks.

Maas was scheduled to meet Secretary of State Mike Pompeo later on May 23 to discuss the future of the nuclear deal, which lifted cripping Western economic sanctions in return for curbs on Tehran's nuclear ambitions.

The talks come two days after the United States vowed to impose what it said would be the "strongest sanctions in history" on Iran.

Earlier on May 23, Pompeo reiterated his tough stance toward Iran in testimony before a House committee. He said the United States will work with as many allies as possible to reach a new deal to halt "all of Iran's nuclear and nonnuclear threats."

"We will apply unprecedented financial pressure, coordinate with [the military] on deterrence efforts, support the Iranian people...and hold out the prospects for a new deal with Iran," Pompeo said.

"It simply needs to change its behavior," he added.

U.S. President Donald Trump long complained about the nuclear accord, saying Tehran was violating the "spirit" of it by continuing to test ballistic missiles and by supporting militant activities in the region. But he left open the possibility of reaching a new deal that would satisfy his demands.

Germany, France, and Britain have been trying to save the agreement, which offered Tehran sanctions relief in exchange for curbing its nuclear ambitions. The other two signatories to the deal, China and Russia, also want to maintain it.

"We in Germany, but also in Europe, are determined to do everything necessary to preserve the deal, and to keep Iran in it," Maas said after meeting congressional representatives on May 22.

Also on May 23, France's foreign minister said Paris would continue to implement the accord even if it did agree with the U.S. that Iran's activities needed to be curbed.

In a May 21 speech, Pompeo set out conditions for any new deal with Tehran, including curbing its support for armed groups in Syri, Lebanon, and Yemen.

U.S. sanctions lifted after the 2015 accord would be reimposed, the top U.S. diplomat said, and those and new measures would together constitute "unprecedented financial pressure on the Iranian regime."

In a May 23 interview on Iran's state television, Iranian Foreign Minister Mohammad Javad Zarif called Pompeo's comments about Iran "untrue" and based on "old illusions."

Iran's supreme leader also blasted the United States for its withdrawal from the nuclear deal.

"The Islamic republic cannot deal with a government that easily violates an international treaty, withdraws its signature, and in a theatrical show brags about its withdrawal on television," Ayatollah Ali Khamenei said in comments posted on his official website.

Iran did not want a fight with Europe, Khamenei said, but Britain, Germany, and France "have shown that they will follow America in the most sensitive issues."

Tehran insists its nuclear program is entirely peaceful, and its compliance with the deal has been verified by the UN nuclear watchdog.

Meanwhile, the state news agency IRNA quoted the Iranian armed forces chief of staff as dismissing U.S. demands for Tehran to curb its influence in the region, and said it would not seek permission from any country to develop defense capabilities.

Pompeo also told the House committee that the United States will not tolerate Russian interference in 2018 U.S. elections and will oppose "continued efforts to do so."

He said the Trump administration had made "enormous efforts" in countering Russian threats.

"It is light years better than what was done in the previous administration.... [But] we have not been able to achieve effective deterrence of some of these efforts of the Russians," he said, adding that some U.S. allies in Europe "are even more threatened by the Russians."

The U.S. intelligence community concluded in January 2017 that Russia engaged in a wide-ranging hacking-and-propaganda campaign to sway the 2016 presidential election.

Moscow denies the allegations despite mounting evidence pointing to an organized effort.

On Ukraine, Pompeo said Russia must honor its commitments under the so-called Minsk accords designed to bring peace to eastern Ukraine. Since war broke out in March 2014, fighting between Russia-backed separatists and Ukrainian government forces has killed more than 10,300 people.

Cease-fire deals announced as part of the Minsk accords -- September 2014 and February 2015 pacts aimed to resolve the conflict -- have failed to hold.
With reporting by AFP, AP, Reuters, and dpa

The weighted average US dollar exchange rate with T+1 calculations in tenge at the end of the morning session ...