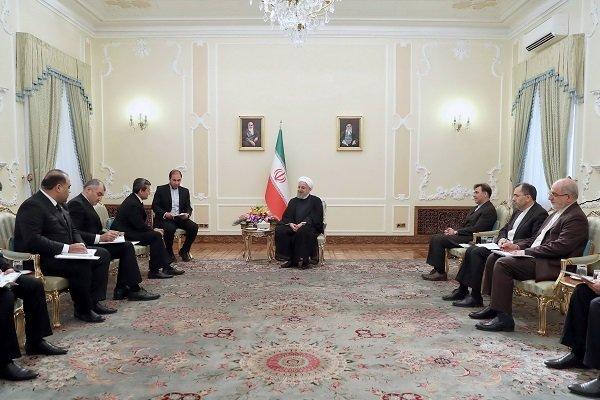 TEHRAN, May 12 (MNA) – Iranian President Hassan Rouhani told the visiting Minister of Foreign Affairs of Turkmenistan Raşit Meredow that Iran is ready to export technical and engineering services to Turkmenistan.

“The Islamic Republic of Iran is determined to deepen ties with all neighbors, including Turkmenistan as a friendly and brotherly country,” said Iranian President Hassan Rouhani on Saturday.

The Iranian head of government made the remarks in a meeting with Minister of Foreign Affairs of Turkmenistan Raşit Meredow that took place in Tehran before noon.

Mr. Rouhani referred to his latest visit to the country and expressed his deep gratitude to Turkmen government and nation for their hospitality.

He also described rapid implementation of Tehran-Ashgabat agreements as to the interest of the two nations and said, “there is no obstacle on the way of development of relations between the two countries and it is essential that these relations further deepen in all fields.”

The President also mentioned ways of cementing ties and said, “Iranian companies are ready to provide technical-engineering services to Turkmenistan and implement projects including motorway and road construction.”

He also invited the President of Turkmenistan to make a visit to Iran and said, “the government of Iran is determined to cement relations with Turkmenistan in all fields.”

The Turkmenistan’s diplomatic chief delivered the written message of the President of his country to Mr. Rouhani and said that the government of his country was determined to deepen and cement relations with Tehran.

Stating that Ashgabat seeks long-term contracts with Tehran in all fields of mutual interest, he continued, “cultural and historical bonds between the two nations are a firm base for inclusive Tehran-Ashgabat relations.”

“The two countries have ample potentials for cooperation in all fields, including energy and transit,” added Raşit Meredow.

LUKOIL drives in risers at Filanovsky field in the Caspian Sea

LUKOIL drives in risers at Filanovsky field in the Caspian Sea   LUKOIL says it commenced driving in of ...

Repair work at Kazakh oil field ahead of schedule