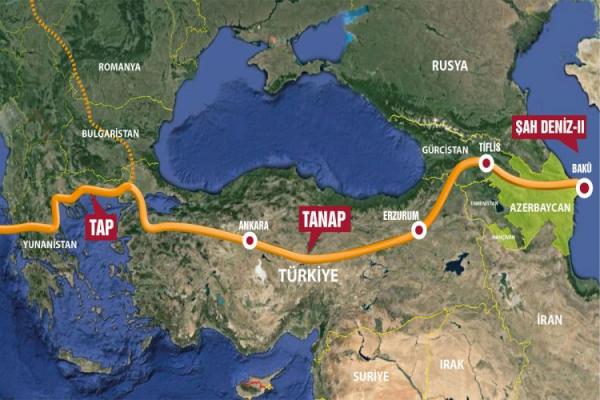 Dr. Maysam Araee Daronkola the director of the International Institute of Khazar Sea Studies (IIKSS) in an Interview with Islamic Republic of Iran News Agency (IRNA)

International Institute of Khazar Studies (IIKSS) – There is a view that energy activities of neighbors can challenge Iran's position. But some observers say that projects such as the Southern Gas Corridor, the Turkmenistan-Afghanistan-Pakistan-India (TAPI) gas pipeline, the Baku-Tbilisi-Ceyhan oil pipeline and other similar projects in the Caspian region are for the benefit of Iran.

According to IRNA, the Republic of Azerbaijan and the Central Asian countries need their neighbors for access to the free sea. These newly independent republics must transport their oil and gas to the free sea through piping and creating pipelines and from there export their products by oil tanker to target markets.

Although some experts consider the construction of these pipelines to be in competition with Iran and to be to the detriment of our country, many experts also look at these plans from the point of view of the development of the region and consider these projects useful for Iran, the region and the world.

Member of the faculty of the University: the implementation of any development plan is in the interest of Iran.

Maysam Araee Daronkola, Member of the faculty of the University Payame Noor is one of the experts who believes that the implementation of any development plan in the region will be in the interest of Iran.

The professor of international law in conversation with the correspondent of IRNA said about impact of the Caspian Sea oil and gas transmission projects on Iran: “It is clear that it is impossible to build home in swampy area and based on this argument it can be said that it's not possible to develop in an undeveloped region.”

“Each poor country with low developmental level act as an economic black hole, which swallow large part of wealth of its surrounding areas and also is challenging fundamentally the development of its entire surrounding area.” he added.

"Development is not a state and political concept, but it can be said with certainty that development is a human-centered concept, whose direct impact can be seen on the present population in the territory of a country.” Araee emphasized.

“Accordingly, the state of development of countries in borders of other countries will be similar to the neighboring countries.” he added.

The development of the eastern provinces is affected by peripheral countries

“Whether we want or not, the economic situation and level of development of Pakistan, Afghanistan and Turkmenistan are strongly affect the eastern regions of Iran.” he said.

“As long as these countries do not have a product other than poverty, do not will have exports to Iran other than poverty and its consequences, so the pipeline or any project that leads to the creation of wealth in neighboring countries, cannot be considered a threat to Iran.” he added.

“Even with foresight, we can consider such projects as a historic opportunity for populations living in the neighboring provinces of these countries.” member of the faculty of the University Payame Noor added.

“We must not forget that economic poverty leads to creation of extremist thoughts and, in practice, brings irreparable damage to Iran.” Araee said.

“Everything that leads to the transfer of wealth and the creation of capital in the regions surrounding Iran, can be considered as a pleasant phenomenon for the private sector economy of Iran, even if Iran's economic sectors, directly and in short time, are not involved in those plans.” he added: "

“Experience has shown that the private sector and in particular the marginalized population earn an important part of their income from neighboring country, and as a result, it can be said that an important part of gross national income is always earned from neighboring countries.” the director of the International Institute of Khazar Sea Studies said.

While pointing out that development in a country has a direct impact on neighboring countries, Araee added: “In such a situation, we can compare the development level of population living in Iran's border provinces in the north, south, east and west of the country.”

He then continued, “Nearly half of Iran's population (nearly 39 million) resides in the border provinces, which in total are neighbors with 12 different countries in four corners of Iran. Nearly 45% of the country's gross domestic product is produced in the border provinces, a significant comparison shows that more than 76% of GDP is produced in the western half of the country.”

Meanwhile, the share of the four eastern provinces of Iran, in total, is 13% of the total GDP, only 6% of which is related to Khorasan Razavi, but the share of the provinces in the northwest, west, southwest and south of the country, which, regardless of the effect of events in countries in the east of Iran is engaged in economic activity, is 38% of the total GDP.” Araee said.

“Significant statistics show that the development of countries in the west of Iran has caused that areas that are close to them, have less distance from economic development and global standards.” he added.

“It should be noted that nearly 11 million people from a total population of Iran live in four eastern Iranian provinces.” the university professor said.

"The needs of India and Pakistan with a population of about 1.5 billion people in the future are beyond what all Gulf countries are able to meet their needs for energy they need to develop.” he said about pipeline TAPI.

“In the worst case scenario, similar projects such as TAPI do not directly damage Iran's economic interests, and it is well known that the main obstacle to the sale of gas and oil to India and Pakistan are issues beyond the TAPI pipeline, which need to be solved in a different way.” he added

He reiterated that it is impossible to think about development in a social and economic swamp, and it is not possible to hope for countries that preparation and supply of wheat flour are considered to be the main challenges they face. The creation of wealth with the implementation of projects in the Republic of Azerbaijan such as the "Southern Gas Corridor", "the Baku–Tbilisi–Ceyhan pipeline", and the implementation of TAPI project in Turkmenistan, Afghanistan and Pakistan not only can promote the cycle of money and wealth in the region, but Iran and its marginalized population can also benefit from direct and indirect benefits of this project.

The Russian-Iranian Axis Expands A couple months ago, I wrote  a long essay for a unit of the U.S. Army ...