What is Russia doing in the Middle East? Political and military events 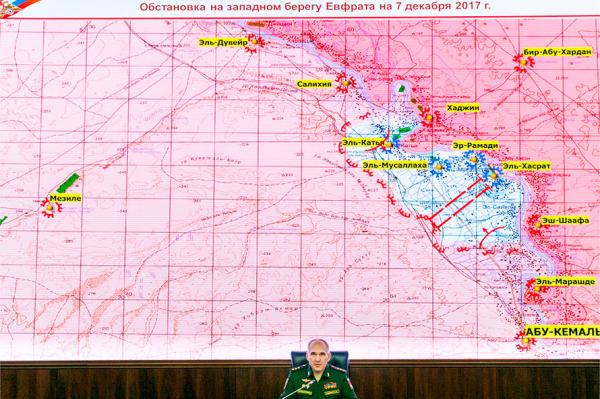 By deciding to intervene militarily in Syria, Russia has saved Bashar al-Assad’s regime and helped him regain most of his territory. Moscow wants to impose its vision of a political settlement, keeping all the players in the game.

Russia’s military intervention in Syria, which began in 2015, was not inevitable. In the first year of the conflict (2011-12), Russia believed the Assad government could survive if it was protected against outside interference. This illusion was dispelled as the fighting intensified. Russia then tried to steer Syria and the international community towards compromise, and Russian leaders began to distinguish between Bashar al-Assad and the Syrian state. Having learned a lesson from Libya, which broke apart after the fall of the Gaddafi regime in 2011, they prioritised protecting Syrian institutions. But they remained convinced that Assad’s presence was vital if the Syrian state was not be dismantled, though this did not guarantee their support for him in perpetuity.

The Russian authorities have never fully trusted Assad; after he came to power in 2000, he attempted a rapprochement with Europe, and in particular with France. He turned to Russia only when this foundered, especially over the Syrian presence in Lebanon. In the 1990s and 2000s, Syria ignored Russian requests about Chechen rebels who had fled to Syria after their attacks on Russian civilian and military targets. Russia remained cautious over its partnership with Syria. In a speech in July 2016, Vladimir Putin indicated his unwillingness to repeat the USSR’s mistake over Egypt by trusting a Syrian government that could switch allies overnight. (In July 1972 Anwar Sadat suddenly expelled several thousand Soviet military advisers, signalling Egypt’s breach with the USSR.)

In September 2015 Russian concerns about the Assad government’s survival deepened as the Syrian opposition became more radical and made territorial advances. The Russians feared the government was on the verge of collapse and reckoned that supplying military, economic or technical aid would merely prolong its dissolution. Direct, long-term military intervention was preferable to the alternatives of supporting Assad (...)

West playing with fire by curbing Aleppo liberation   While Syrian Army siege over Aleppo is completed and the ...