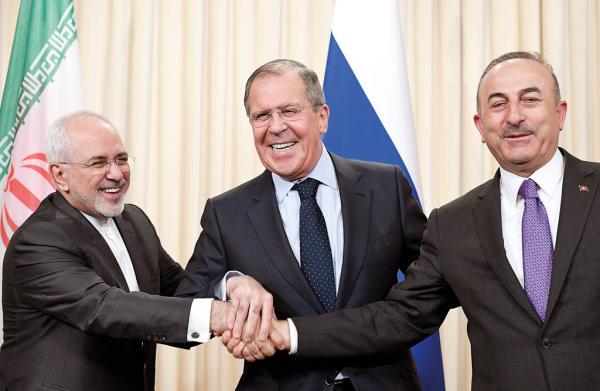 MOSCOW • Russian, Iranian and Turkish foreign ministers yesterday talked up their successes in brokering a political solution to the Syrian conflict at a meeting in Moscow.

The three nations have been attempting to resolve the Syrian conflict at talks that started last year in Astana, Kazakhstan, in competition with a US and UN-backed Geneva initiative.

The ministers emphasised the success of their peace talks in Astana, which Mr Lavrov said are "firmly standing on their feet".

"Thanks to it, it became possible to tackle the situation on the battlefield with the (Islamic State in Iraq and Syria) group and the Al-Nusra Front," he said, as extremists have lost most of the territory they controlled in Syria.

The conflict in Syria has lasted since 2011 and killed more than 350,000 people. Both Russia and Iran have deployed forces to Syria to back up Mr Assad against anti-government rebels.

Yet the latest talks in Moscow came as the alleged chemical hit on April 7 in the Syrian town Douma has prompted sharply differing responses from Turkey and Russia.

"I curse those who carried out this massacre," Turkish President Recep Tayyip Erdogan said, welcoming Western air strikes in retaliation as "appropriate".

Russia said the attack was staged to discredit Mr Assad and slammed Western strikes on Syria.

Dr Alexey Malashenko, a specialist in the Syria conflict, said the trio have a "very shaky" alliance and "there's no way they can reach an agreement" over the suspected chemical attack.

Nevertheless, the limited nature of US-led strikes suggests the "peak of tensions has passed", he said.

Yesterday, Mr Lavrov implicitly criticised Damascus after it blocked UN humanitarian aid to Douma, saying Moscow was calling for the regime to be more "flexible".

The next Syria talks in Astana are set for May 14.