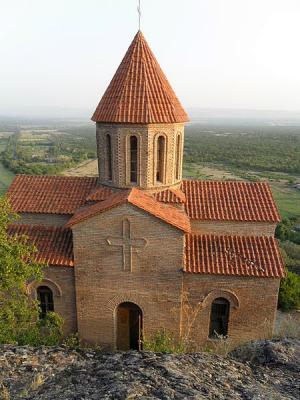 Saingilo, now a region in Azerbaijan, was once a province of the Kakheti Kingdom of Georgia.  The province officially became part of Azerbaijan in 1922 under the ruling of the communist government of Moscow.  To this day, Saingilo is home to a small population of ethnic Georgian people known as the Ingiloy.  As such, Saingilo—once belonging to Georgia and inhabited by ethnic Georgians—contains many Georgian Orthodox churches.  Some are in adequate condition and some are in ruins, but a few have remained preserved and even continue to operate.

The only other church that operates in any manner is the Church of Kish, which currently functions as a museum.

The Saingilo area, however, is rife with these Georgian churches.  However, the majority of them are non-functioning.  For example, the Kurmukhi Church of St. George, the Dzeli Tskhoveli Church, the Little Alaverdi in the Qakh district, the Meshabashi Archangel Church, and the Bazari Virgin Mary Church (Bakhtala Virgin Mary Church), a medieval church in Zaqatala, are all churches that no longer function in any matter but can be visited and remain in decent condition.