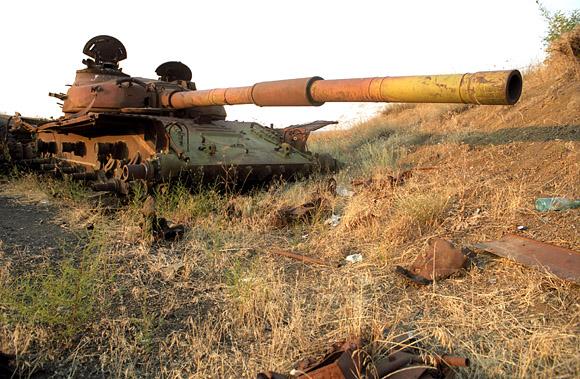 For almost three decades, the most dangerous unresolved conflict in wider Europe has lain in the mountains of the South Caucasus, in a small territory known as Nagorno-Karabakh. In the late 1980s, the region confounded the last Soviet leader, Mikhail S. Gorbachev. In the early 1990s, the conflict there created more than a million refugees and killed around 20,000 people. In 1994, after Armenia defeated Azerbaijan in a fight over the territory, the two countries signed a truce — but no peace agreement.

Nagorno-Karabakh erupted again last weekend. It seems one of the players — most likely Azerbaijan — decided to change the facts on the ground. Dozens of soldiers from both sides were killed before a cease-fire was proclaimed on Tuesday. It could fall apart at any moment. The situation is volatile, and there is a danger that the conflict could escalate further unless the international community stops it.

A new all-out Nagorno-Karabakh conflict is the stuff of nightmares. Given the sophisticated weaponry both sides now possess, tens of thousands of young men would most likely lose their lives. Russia and Turkey, already at loggerheads and with military obligations to Armenia and Azerbaijan, respectively, could be sucked into a proxy war. Fighting in the area would also destabilize Georgia, Iran and the Russian North Caucasus. Oil and gas pipeline routes from the Caspian Sea could be threatened, too.

At the heart of the issue is the status of the Armenian-majority highland enclave of Nagorno-Karabakh, which was part of Soviet Azerbaijan. As the Soviet Union crumbled, ethnic Armenians in the territory campaigned to join Armenia. This became a full-scale war, and the Armenians have maintained control of the territory since.

Nagorno-Karabakh has been mostly quiet, save for occasional skirmishes. Most international diplomats pay little attention to this protracted conflict in the Caucasus, giving the impression that Nagorno-Karabakh is intractable but not especially dangerous, like Cyprus. The hope among the international community has been that the problem can be left alone.

That notion was shaken over the past week. More than 20 years on, nationalist hatreds have not abated. In fact, they’ve been fed over the years by official propaganda on both sides. Meanwhile, the very geography of the conflict makes it inherently dangerous.

The 1994 truce left the Armenian side in control not just of the disputed province, but also of a section of Azerbaijani territory around Nagorno-Karabakh. The Armenian side has no legal claim on these lands, regarding them as a protective buffer zone, but they were home to more than half a million Azerbaijanis, who were made refugees. That occupation is unsustainable and unjust, but the use of force will not deliver justice.

Azerbaijan has wasted years in denunciations of “Armenian aggression” without ever offering the Armenians of Nagorno-Karabakh credible guarantees that it respects their rights and does not merely wish to destroy them. A just solution of the conflict will require a serious commitment by both sides to make compromises and live together.

Recep Tayyip Erdogan, Turkey’s president, has blamed France, Russia and the United States, the countries charged with mediating the conflict by the Organization for Security and Cooperation in Europe, for failing to clean up the mess. This is wrong, too. Yes, more could have been done over the years to resolve the dispute over Nagorno-Karabakh, but mediators mediate — they cannot alone solve conflicts between intransigent parties.

The bitter truth is that leaders in Armenia and Azerbaijan have become trapped by their own rhetoric, promising their publics total victory that can never be achieved. They have employed the status quo as a weapon to shirk hard questions about their own legitimacy or to divert people’s attention from socioeconomic problems.

A similar temptation is to identify Russia as the real villain. For sure, the Kremlin has played a role in manipulating the ethno-territorial conflicts that emerged from the breakup of the Soviet Union. And Russia continues to sell weapons to both Armenia and Azerbaijan. But Russia’s role in Nagorno-Karabakh is much weaker than it is in Georgia’s frozen conflict, let alone in Ukraine. Russia shares no border with the conflict zone, has no troops on the ground and, in different ways, supports both sides. Its ability to control what happens in Nagorno-Karabakh is limited.

If there is one ray of hope in this bleak landscape it is that there is a peace process — albeit a faltering one — in place already. A draft of a sophisticated peace plan, dating from 2005, promises both sides much of what they want: a return of Azerbaijani displaced persons and restoration of lost Azerbaijani lands in exchange for security for the Armenians of Nagorno-Karabakh and a promise of self-determination and perhaps, eventually, independence.

What is missing in the South Caucasus is the political will to engage with a plan that involves doing a deal with the enemy. What is missing internationally is the admission that there is no low-cost option to resolve the conflict. Over the past week, mediators helped to broker a new cease-fire. But Nagorno-Karabakh requires more than just shuttle diplomacy. A resolution requires a complex multination peacekeeping operation and coordination between the United States, Russia and France to be joint guarantors of a peace deal.

That is a big challenge, but one dwarfed by the prospect of a new catastrophic war in the Caucasus. The big powers could start by convening a peace conference in Minsk, Belarus, first called for in 1992, but never even attempted. That would send the message that the world finally takes this conflict seriously — before it is too late.

IIKSS - Azerbaijan's leading IT company Cybernet has won a World Bank-supported tender announced by the Ministry of ...