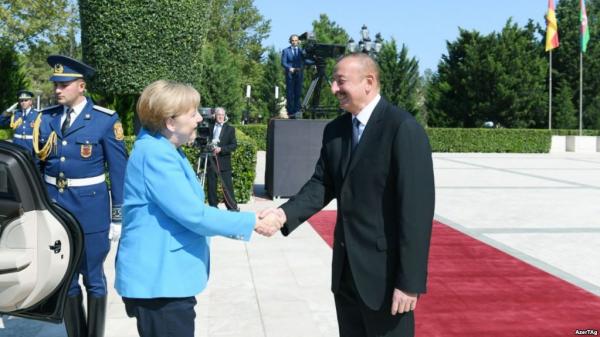 German Chancellor Angela Merkel held what she called "intensive" discussions with Azerbaijani President Ilham Aliyev in talks that addressed energy cooperation, human rights, and the conflict between Azerbaijan and Armenia over the disputed Nagorno-Karabakh region.

The meeting between Merkel and Aliyev in the Azerbaijani capital, Baku, on August 25 included a discussion of the human rights situation in the South Caucasus nation that the German chancellor said was conducted in an "open atmosphere," Merkel's spokesman, Steffen Seibert, said on Twitter.

Critics accuse Aliyev's government of carrying out a targeted crackdown on dissent in recent years, though the Azerbaijani leader has repeatedly rejected such criticism.

"We discussed the issue of the domestic situation in Azerbaijan and addressed human rights, also in a very open atmosphere," Merkel said, according to a transcript of her press conference with Aliyev released by her office.

Merkel's stop in Baku on August 25 -- the final leg of a three-day tour to South Caucasus that included visits to Georgia and Armenia -- also included a meeting with rights activists and the prominent Azerbaijani investigative journalist Khadija Ismayilova, a former RFE/RL contributor.

Ismayilova, who spent nearly 18 months in jail on charges widely viewed as retaliation for her investigative reporting before her release in May 2016, wrote on Facebook following the meeting that she spoke to Merkel "about corruption and how it undermines peace, democracy, and security in Azerbaijan."

"I asked to be more outspoken on human rights and democracy issues because people here need to see examples of European politicians who aren't silenced by corruption money," she wrote.

Merkel "said our concerns are important and some have been addressed in the meeting she had with President Aliyev. I hope to hear more from her," Ismayilova wrote.

Aliyev, who has repeatedly shrugged off accusations of corruption and stifling dissent, defended his government's record on human rights during an August 25 news conference alongside Merkel, saying Baku "is committed to democratic values."

"All democratic institutions exist in Azerbaijan. All the liberties have been provided, in particular, freedom of speech, freedom of the press. There are hundreds of media outlets in Azerbaijan, including opposition media. Thereby, no one is being persecuted for the criticism [of the authorities] or for the [critical] views in Azerbaijan," Aliyev said.

The two leaders also discussed energy cooperation between Europe and Azerbaijan, where Aliyev has ruled the nation of almost 10 million people with an iron fist since 2003.

Addressing a business roundtable in Baku on August 25, Merkel described Azerbaijan as "an important partner in the diversification of our energy supply within the European Union," according to a transcript released by her office.

Merkel also said that Berlin could assist in mediating the conflict between Azerbaijan and Armenia over the disputed Nagorno-Karabakh region.

"Germany wants to help find peaceful solutions," Merkel told reporters, adding that the conflict over the mountainous territory is a significant burden on the region.

The region, populated mainly by ethnic Armenians, declared independence from Azerbaijan amid a 1988-94 war that claimed an estimated 30,000 lives and displaced hundreds of thousands of people.

Since 1994, Nagorno-Karabakh has been under the control of ethnic Armenian forces which Baku says include troops supplied by Armenia. The region's claim to independence has not been recognized by any country.

Internationally mediated negotiations involving the so-called Minsk Group of the Organization for Security and Cooperation in Europe (OSCE) helped forge a cease-fire in the region, which is not always honored, but have failed to produce a lasting settlement of the conflict.

In Yerevan a day earlier, Merkel told reporters that "it is important that the conflict is resolved peacefully" and that Germany "stands ready" to contribute to a solution.

Merkel noted that Germany is a member of the OSCE's Minsk Group and that "we stand ready to assume responsibility within the framework of the Karabakh settlement process."

In an interview last month (August 16) with the media outlet Azeri Daily, Azerbaijani member of parliament and ...