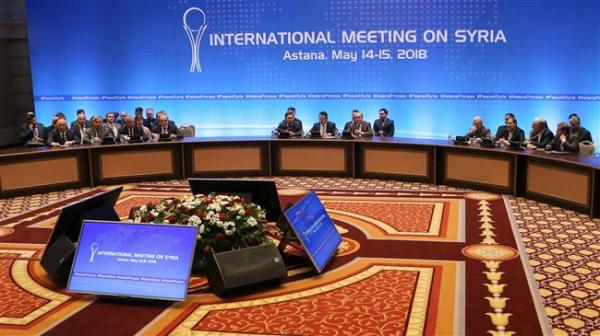 United Nations Special Envoy Staffan de Mistura has invited Iran, Russia and Turkey to talks due to be held in Geneva next month on forming Syria's Constitutional Committee, a UN spokeswoman says.

"Special Envoy de Mistura continues his consultation on the establishment of a Syrian-led, Syrian-owned and UN facilitated Constitutional Committee within the framework of the Geneva process and in accordance with Security Council Resolution 22-54 2015," Alessandra Vellucci said at a news conference on Friday.

"In this context, Special Envoy de Mistura has invited Iran, the Russian Federation and Turkey for formal consultations at the United Nations office at Geneva on 11 and 12th September 2018 to work on the Constitutional Committee," she added.

The talks on forming a committee to draft a new constitution for Syria will be made up of representatives of the Syrian government and the opposition.

The negotiations are expected to be followed by parallel UN talks involving United States; however, no exact date has been fixed yet.

Iran, Russia and Turkey, as guarantor states for a peace process in Syria, expressed their firm determination in late July to counter any plot aimed at partitioning the Arab country.

"The Islamic Republic of Iran, the Russian Federation and the Republic of Turkey confirmed their strong adherence to the sovereignty, independence, unity, and territorial integrity of Syria," Russian Special Envoy for Syria Alexander Lavrentiev said while reading a joint statement at the end of the tenth round of the two-day International Meeting on Syria in the Black Sea resort of Sochi.

Syria has been gripped by foreign-backed militancy since March 2011. The Syrian government says the Israeli regime and its Western and regional allies are aiding Takfiri terrorist groups wreaking havoc in the country.

All initiatives with the purpose of putting an end to Syria's seven-year-old conflict have failed so far.

The ninth round of crisis resolution talks between the Syrian government and armed opposition, mediated by Iran, Russia and Turkey, came to an end in the Kazakh capital of Astana in May, building a positive outlook for momentous follow-up negotiations.

At the end of the two-day talks, the participants issued a joint statement, emphasizing the need to respect “the sovereignty, independence, unity and territorial integrity” of the crisis-torn Arab country.

The Caspian Sea: A Quest for Environmental Security

The Caspian Sea: A Quest for Environmental Security This volume is based on the presentations and deliberations of an Advanced Research ...

Starting negotiations with Iran under US pressures impossible: Russia