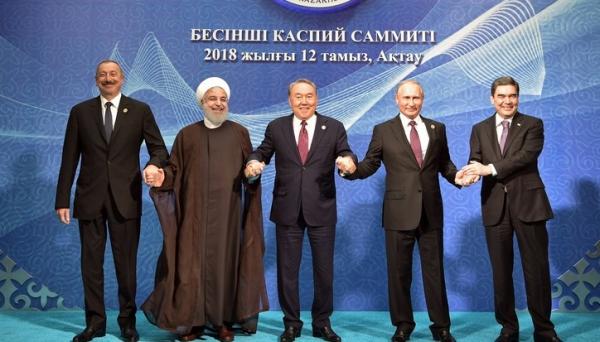 Iran, the Russian Federation, Kazakhstan, Azerbaijan and Turkmenistan have signed an agreement on the Caspian Sea, the world’s largest enclosed body of water and a region that has been the subject of dispute since the breakup of the Soviet Union in 1991. Prior to 1991, the USSR and Iran shared control of the sea.

The five countries reached the deal, known as the Convention on the Legal Status of the Caspian Sea, on 12 August 2018 during the Caspian Sea Summit in Akta, Kazakhstan. One major point of contention leading up to the Summit was whether to define the Caspian Sea as a lake, meaning it would be divided equally between all five countries, or as a sea, which would then be governed by the UN Convention on the Law of the Sea (UNCLOS). The agreement divides the seabed into territorial zones (as is the norm with a lake) and the surface as international water (as is the norm for an officially designated sea).

UN Secretary-General António Guterres said the agreement will be “invaluable” in regulating a range of issues among the Caspian Sea littoral countries.

In a statement, UN Secretary-General António Guterres welcomed the signing of the agreement, noting that it demonstrates the importance of regional cooperation and multilateralism for maintaining international peace and security. He highlighted the convention as a “significant step” towards easing regional tensions, and said it will be “invaluable” in regulating a range of issues among the Caspian Sea littoral countries.

Azerbaijan is Kazakhstan’s strategic partner in the Caucasus. Kazakhstan’s President Nursultan Nazarbayev made the remark during the meeting with Azerbaijan’s new ...