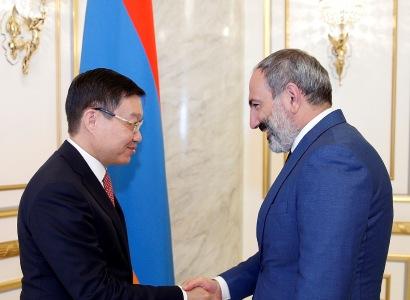 PM Pashinyan highlighted the future development of Armenian-Kazakh relations, and expressed confidence that the active efforts of the Ambassador will foster the expansion and deepening of bilateral relations in different spheres. Nikol Pashinyan underlined that a good atmospheres exists in the relations of Armenia and Kazakhstan and added that it will foster the development of cooperation between the two states.

Timur Urazyaev noted that Kazakhstan is interested in strengthening the cooperation with Armenia and effective partnership on both bilateral and multilateral formats, including in the sidelines of the EAEU and the CSTO.

The interlocutors highlighted the expansion of trade and economic relations between the two countries and noted with satisfaction that in the first half of 2018 trade turnover rose 2.5-fold against the same period of the last year.

The sides also referred to Nagorno Karabakh conflict settlement, highlighting the regional peace and stability. PM Pashinyan emphasized that the conflict should be settled exclusively in the sidelines of the OSCE Minsk Group Co-chairs’ format.

Heads of state and government participating in the meeting of the North Atlantic Council in Warsaw July 8-9 2016 have ...

IIKSS - The State Oil Fund of Azerbaijan (SOFAZ) is interested in the acquisition of high-quality real estate ...

Travel service Travel.ru has defined what tourism destinations in the CIS countries are the most promising in 2016, Fineko/abc ...