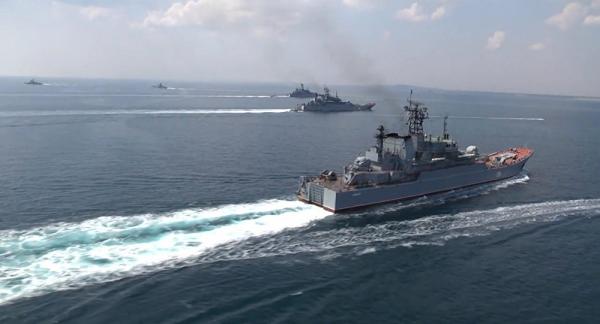 The principle of non-presence of armed forces not belonging to the five Caspian countries is one of the agreed provisions of the Convention on the Legal Status of the Caspian Sea, which is expected to be signed at a summit in Kazakhstan later in August, Azerbaijani Foreign Minister Elmar Mammadyarov told Sputnik on Monday.

The presidents of the five states bordering the Caspian Sea will meet in Kazakhstan on August 12 to sum up the multi-year talks on determining the legal status of the disputed body of water and sign a convention concluding the matter.

"The sides signing such a document thereby endorse provisions stipulated in it and undertake commitments under it. On the basis of the universal principle ‘Pacta sunt servanda’ [agreements must be kept], we should firmly adhere to the provisions, stipulated in the convention. Non-presence of armed forces of non-littoral countries in the Caspian is one such agreed point. In general, the document declares the Caspian a zone of peace, good-neighborliness, friendship and cooperation," Mammadyarov said.

According to Mammadyarov, the Caspian Sea "should remain a bridge" which connects the coastal states, expanding their opportunities and creating adequate conditions for the development of their national economies.

He noted that the Caspian nations had created effective infrastructure and an appropriate investment climate in the region. The minister also stressed that the countries were looking forward to boosting cooperation on the basis of existing confidence-building measures and partner-like dialogue.

The littoral states — Azerbaijan, Iran, Kazakhstan, Russia and Turkmenistan — have been discussing the legal status of the sea for over 20 years. The main difficulty in determining the status is linked to its recognition as a lake or a sea, the divisions of which are regulated by different provisions of international law.

On December 5, following a ministerial-level meeting of the Caspian nations, Russian Foreign Minister Sergei Lavrov said that work on the convention had virtually been completed, and its draft was expected to be submitted for the Caspian leaders' approval in Kazakhstan in the first half of 2018.

CASPIAN SEA ISSUES Questions surrounding the legal status of the Caspian Sea have hindered--but not stopped--further development of the ...