U.S. Iran Deal Exit Brings Russia and China Closer to Europe as They Meet Behind Trump’s Back Political and military events 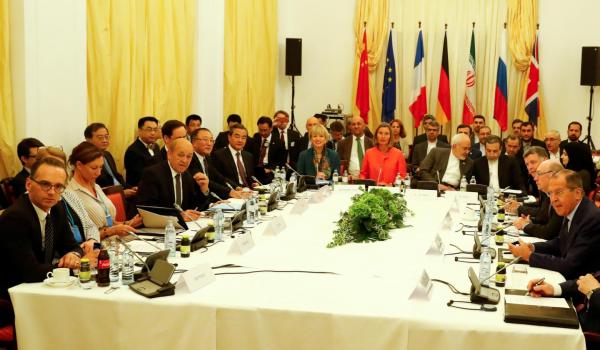 The top diplomats of China, EU, France, Germany, Russia and the U.K. have assured Iran that they were willing to salvage a historic nuclear deal abandoned by the U.S.

The deal, known officially as the Joint Comprehensive Plan of Action (JCPOA), was forged under the administration of former President Barack Obama in 2015 and scrapped by his successor, President Donald Trump, in May. With Iran looking to face stricter U.S. sanctions, the foreign ministers of the EU and five other nations who signed the nuclear agreement met Friday in Vienna in an attempt to negotiate a viable framework in the absence of Washington.

Reading an official statement from the Joint Commission of the JCPOA, High Representative of the European Union for Foreign Affairs and Security Policy Federica Mogherini said the ministers "deeply regret" the U.S. departure from the agreement. She said they "reconfirmed their commitment to the full and effective implementation of the nuclear deal," calling it "a key element of the global nonproliferation architecture and a significant achievement of multilateral diplomacy."

"The participants recognized that, in return for the implementation by Iran of its nuclear-related commitments, the lifting of sanctions, including the economic dividends arising from it, constitutes an essential part of the JCPOA," the statement said, later adding that the initiatives listed were "aimed at preserving the nuclear deal which is in the security interest of all."

On 1 July 2016, the Council prolonged the economic sanctions targeting specific sectors of the  Russian economy until 31 January 2017. ...

IIKSS - Marat Issekeyev, a scientist from Kazakhstan, has invented a cheap wind turbine that can generate almost ...