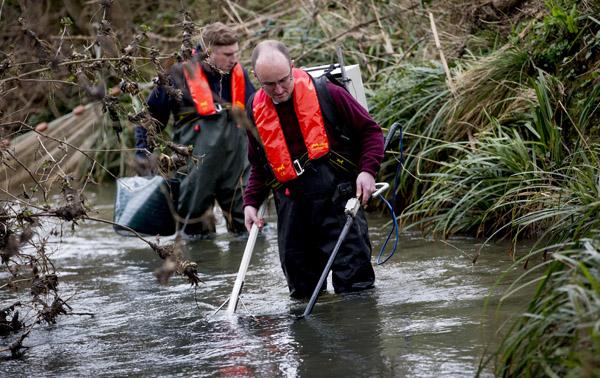 Large building projects are delayed by all sorts of issues — money, employees who lack the right skills, public sentiment. But sometimes it is fish spawn, or great-crested newts. The deliverer of such bad news might be Peter Walker.

When I find him standing in the River Stour in a pair of chest-waders with what looks like a clunky jetpack dating from the 1950s with dials and big switches on his back, he seems rather sunny for a harbinger of doom.

Ecological discoveries are a mixed blessing for this former academic. On the one hand, the biologist in him is thrilled to see rare fish. On the other, finding a way to preserve the ecology might prove an impediment to the site’s development, costing money and causing delays.

This is murky work, literally. Which is what he likes about it. “It gives me an opportunity to have a look into that hidden world that other people don’t get to see,” he says. For him, fish hold an air of mystery. “They live there under the water . . . there are fish down there that we can’t see right now.”

The aquatic ecologist advises companies on the environmental impact of construction and engineering. In other words, he will tell a developer how to build a dam, bridge or pipeline crossing rivers or seas, and how to do so in a way that protects fish.

Today, he is teaching two colleagues how to use the electro-fishing backpack, stunning fish and then scooping them up with his net to take a look, before putting them back in the river. This is the other side of his work: exploring the source of pollution and advising on how to restore damaged habitats.

Environmental consultancy jobs like Mr Walker’s have evolved in response to growing legislation but also to greater understanding of these issues by the public, which in turn exerts pressure on businesses and governments. Some work as sole traders, others for environmental consultancies like RSK, which employs Mr Walker, or public and charitable organisations.

Yet ructions in the oil price and global mining and commodities markets are hitting the sector worldwide. Environment Analyst, a market intelligence service for the sector, says that North America — the largest market — and Asia have been hit particularly hard. The global environmental consultancy market suffered a 4.1 per cent decrease in 2014, falling to $27.5bn, according to the latest research by Environment Analyst, though the outlook might look bleaker today. Western Europe has held steady so far, buoyed by large infrastructure projects. In the UK, for example, the Chartered Institute of Ecology and Environmental Management, the professional body, reports that membership grew by about 1,800 in 2005, up to 5,100 today.

RSK reports that business is brisk, due to the planning of large projects such as the UK’s HS2 and HS3 high-speed railway links. Despite the Middle East’s weakness, the company has moved into Iraq, cleaning up the desert around Basra, washing the oil and sand, as well as developing local expertise.

People such as Mr Walker try to prevent conflict between companies and environmentalists. Laws require companies planning an infrastructure or construction project to conduct an environmental impact assessment — motorway builders might be instructed to incorporate a toad crossing in their road design. Companies that fail to do so face prosecution and fines.

Jason Reeves, policy and communications manager at CIEEM, says environmental issues are a priority for companies. “I don’t think anyone would agree that we should simply bulldoze our natural environment without first assessing what we may lose.”

For companies, there can be huge harm to their reputation if they cause environmental damage, as BP’s oil spill in the Gulf of Mexico in 2010 demonstrated. Such public disapproval is far from universal, however. Working in Albania, Mr Walker would see locals walking out of blocks of flats with rubbish bags and flinging them into the river.

Paul de Clerck, co-ordinator of the economic justice programme at campaign group Friends of the Earth Europe, questions the significance of reputational harm for those in the business-to-business sector rather than those selling products or services to consumers. Moreover, he says some consultants depend on contracts from companies, which means there can be a conflict of interest.

Other environmental campaigners note that advice provided by some consultants amounts to greenwashing and is useless. RSK says it maintains its integrity and has a reputation for “problem solving” and innovation.

As with most sectors, technology has changed the job. Instead of going to a pond and setting traps for newts, Mr Walker can take a few water samples and trace them for DNA. It makes his work quicker, but is unlikely to do him out of a job.

Drones are used for surveying large areas, but they can miss things so companies still want an ecologist on the ground. Trees and rivers are hurdles for drones surveying aquatic species too.

Mr Walker has been “hooked” (a pun he drops into conversation more than once) on fish since his father bought him his first fishing rod at eight years old. Later, he admits he misses aspects of academia. “Doing new research, making new discoveries, is an incredible thing to do.”

Yet there is much to enjoy about his career as a consultant — working in lush landscape; watching an otter drift by on its back. This river has sentimental value for him: his wife caught her first fish from here.

Today, in the tangled countryside of the Cotswolds, he is examining a “pollution incident” for the Environment Agency, which has caused fish to die. He has pulled out at least 20 dead fish, inc­luding big trout, which was “a bit heartbreaking really”. In this case, the likely reason for the dead fish was slurry breaching the walls of a pit and leaking into the river. He holds out a gasping fish. “The oxygen levels drop, so they’d suffocated.”

Not all his work is so close to home. He has advised on the effect to fish of an Azeri project in the Caspian Sea, and on the building of the Trans-Adriatic gas pipeline through Greece and Albania.

After checking the fish, the habitat, the vegetation, the consultants make a record and advise the organisation contracting them what the best steps are. If a construction company was about to disrupt a salmon spawning site, “you’d have to have very good reasons for doing it”, he says.

“You would have to write mitigation measures — reinstating the habitat, only doing your work at certain times of the year so that you don’t disturb the fish that are spawning,” he says.

“It’s not just a case of not making things worse, but if they can [they make] things better than when they started.”